Vanach is honored to invite Ms. Liang Guanming, a paper-cut artist , to live on FB on November 7th (Sunday) at 8:00 p.m. to share with you the decorative patterns of paper-cut art! 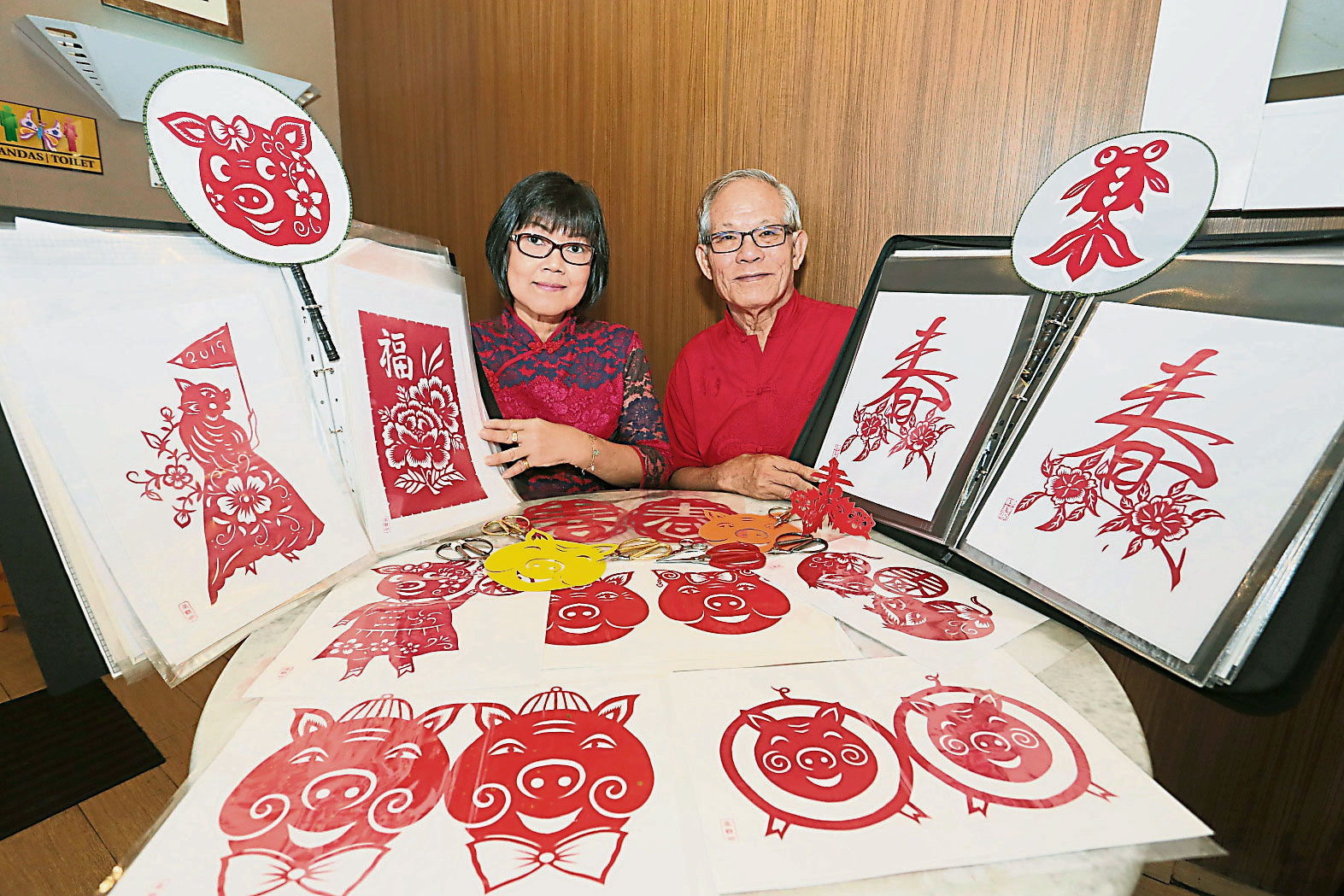 Yang Xiyun and Liang Guanming, a paper-cut couple from Alor Setar, Kedah, have always loved the art of paper-cutting. Liang Guanming, who served as a tutor in her early years, went to Tianjin University in China to participate in the teacher training organized by the Students' Association in China in 2011. She studied with a Chinese paper-cut teacher for two days in the middle, which inspired her interest in the art of paper-cutting.

After the training, she brought back the paper-cut books she bought from China, and often explored the paper-cut method at home. The so-called long-term achievements, now, not only is she very skilled in paper-cutting skills, even her husband Yang Xiyun fell in love with paper-cutting because of her influence, so they formed a husband and wife team to promote the art of paper-cutting together.

"Therefore, during the Lunar New Year, it is common for people to paste red paper-cuts with the word 'Fu' or 'Spring', as well as peach, which symbolizes longevity, pomegranate, which symbolizes many children and grandchildren, and paper-cuts with figures such as the Chinese zodiac and Fu, Lu, and Shou. , to add a festive atmosphere to the New Year. In addition, Chinese weddings and new houses are also commonly seen in Chinese weddings and new houses. Divided into even and singular cuts

She said that paper-cutting methods are divided into double-numbered cuttings and odd-numbered cuttings. The even-number cut method includes the symmetrical folding and cutting method, which is to fold a square piece of paper in half and then cut out fonts or figures, such as Chun, Ji, Da, Ba, Xi, He, Shuang, He, Chang, Ping, Quan, Shan, All can be cut into glyphs by the symmetrical folding method. She said that the odd-numbered origami method is more difficult. You can't fold the paper symmetrically, but fold the original square paper into one-third, one-fifth or one-seventh, and then cut the paper. . Liang Guanming said that the main materials for paper-cutting are red rice paper and scissors. Rice paper is a high-quality paper variety that can withstand the sun and is not easy to fade even if it is accidentally touched with water. Both sides of red rice paper are pure red, and there is no difference between the front and the back, so it is very suitable for paper-cutting materials.

"However, rice paper is not produced locally, only in China. Since our daughter-in-law is from China, we asked her to help buy red rice paper from China as the material for our paper-cutting."

"Before doing paper-cutting, I would first refer to the works of Chinese paper-cutting masters through the Internet and then conceive the graphics or fonts I want to cut.

Next, I found pictures of patterns or fonts from the Internet, then copied and sketched on red paper, folded the paper in half, and then cut the paper. "

At the beginning, she accidentally cut the paper due to her unskilled craftsmanship, so she had to cut it again. However, now that her craft is very skilled, she will no longer cut paper.

Cutting dragons is the most challenging. It took 2 weeks to cut dragon scales.

Liang Guanming said that every Lunar New Year, in addition to cutting the graphics representing the zodiac of the year, she also cuts various mascots, such as dragons and phoenixes, mandarin ducks and magpies. Among them, she believes that dragons are the most difficult to cut, and it takes a lot of time. In order to cut the dragon's head shape and dragon scales beautifully.

Yang Xiyun also has similar experience. He once cut a dragon boat graphic that means "smooth sailing". As a result, it took him about two weeks to complete the dragon scale cutting method, which is very challenging.

He said that nowadays paper-cuts are not just New Year decorations, but can also be used as souvenirs or gifts. Although the paper-cut styles of the couple are different, the two have worked together seamlessly. They have worked together to cut the school emblem and presented it to the school as a souvenir. They also cut the Penang state emblem and presented it to the state government. Presented to the Cross Harbor Voluntary Fire Brigade, Kedah, etc.

"It is more difficult to cut school badges, state emblems and logos than window grilles, because we can't change their designs indiscriminately to show respect for the school, the government and related organizations, so these cut out souvenirs are also more commemorative."

They have also cut shoe graphics and cat graphics as gifts, the former for shoe store owners and the latter for pet shop owners to congratulate them on the opening of their new store.

Before, they had also cut a hundred different designs of window grilles and fonts at the request of customers. As a result, it took the couple a total of 5 days to complete the task. Liang Guanming said that the two of them have different paper-cut styles. She can accept cartoon or abstract paper-cut art, but her husband, Yang Xiyun, prefers a realistic style.

Liang Guanming looks like a pig, and for her, pigs are cute, energetic and laughing animals. Therefore, in line with the arrival of the New Year of the Pig, she specially cut paper-cuts of pig figures. The expressions, movements and appearances of each pig figure have their own style, and they all show smiling faces.

"Although pigs in reality have Mimi eyes, I deliberately cut pigs into big eyes when I cut the graphics of pigs, because I think the art of paper-cutting can be expressed in exaggerated or surreal ways. The works presented will be special.”

Yang Xiyun said that if he cuts the shapes of animals, he usually cuts out shapes according to the real appearance of the animals, rather than cutting them into cartoon graphics.

He loves to cut window grilles because when he used to attend the Chinese New Year temple fair, when he finished cutting the window grilles, the people and tourists around him would be amazed when he opened them. He feels that window grilles can bring surprises to people, so he always enjoys cutting them.

They are also often invited to participate in various cultural events, temple fairs, industry promotions, etc. in Kedah and Penang to promote the art of paper cutting to the public. They are also offering small-class paper-cutting classes at their homes in Kedah to more carefully instruct the public on paper-cutting methods. The couple also plan to start classes in Penang in the future to gather interested Penangites to learn the art of paper-cutting, so that this Chinese folk art can be passed on.

◆Have the necessary paper-cutting skills

🔎Welcome to visit our webpage: https://vanachdiy.com