Cloisonne is called "copper tire cloisonné enamel", commonly known as "enamel blue", also known as "inlaid enamel". An utensil made by filling the enamel color glaze into the pattern and firing it. Because it was popular in the Jingtai period of the Ming Dynasty, the production skills were relatively mature, and the enamel glaze used was mostly blue, so it was named "cloisonne". Cloisonne , one of the famous special metal handicrafts in China, reached its peak during the Jingtai period of the Ming Dynasty, and produced the most exquisite and famous handicrafts, so later generations called this metalware "Cloisonne" .

On December 1, 2017, the "Specifications for English Translation and Writing in the Public Service Field" were officially implemented, which stipulated that the standard English name of cloisonne is Cloisonne. 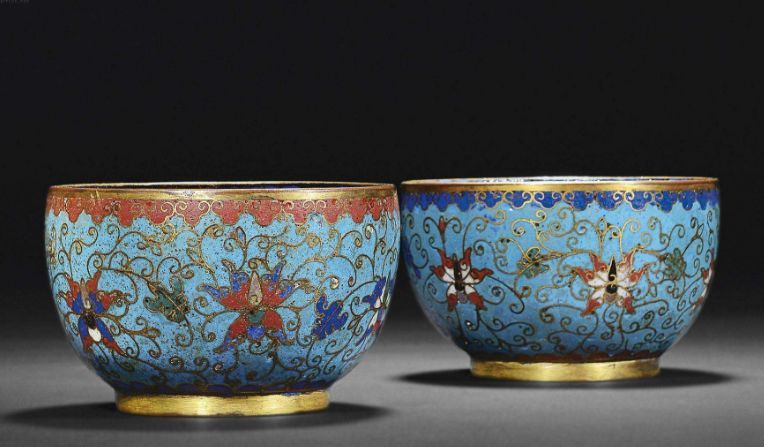 It can be said that the production process of cloisonne not only uses bronze technology, but also uses porcelain technology, and at the same time introduces a large number of traditional painting and carving skills, which can be regarded as a master of traditional Chinese craftsmanship.

The production process of cloisonne is a bit complicated. From the technical point of view, it can be divided into: tire making, filigree, welding, drug spotting, blue burning, polishing and gold spotting .

1【Tire making】 Before Qianlong, the tire making was cast in bronze, which took a long time, had high precision, and was good at shaping the shape. During the Qianlong period, it was changed to use red copper (pure copper) to be hammered and formed, so it is also called a tire, which greatly saved the consumption of copper.

2 [Filigree] Use tweezers to pinch and break the flattened fine copper wire into various exquisite patterns, such as patterns, moire patterns, geometric patterns, figures or animal patterns, etc.; Plants, which can be made into vegetable glue) or flux to adhere to the copper tire, and then sieve the silver solder powder. 3【Welding】 Use high temperature roasting at 900 degrees to firmly weld the copper wire pattern to the copper tire.

The melted enamel cools and turns into a solid, which is then ground into a fine powder and mixed with water before being filled. Add the enamel toner into the solvent, and mix out the glazes of different colors. Use a metal spatula to fill various enamel glazes into the gaps of the silk pattern according to the outline of the thread. First, point the ground, then point the flowers, then point the blue, and then Add bright white. 5【Burning Blue】 The cloisonne plate made in the Qing Dynasty is baked in a kiln, and the powdered glaze is melted by high temperature sintering at 800-1000 degrees. Because the volume of the enamel glaze after firing will be reduced by about 1/3 compared to the original, in order to keep the surface of the vessel from being uneven, it needs to be filled with enamel of the same color multiple times.

This repeated two to three or four times of glazing and firing can make the glaze level with the copper wire without pits.

6【Polishing】 Put the roasted utensils into water, polish them with coarse sandstone, yellowstone, charcoal, etc., to smooth the uneven blue glaze, and finally use charcoal and scraper to smooth the copper lines, bottom lines, The mouth line is smoothed and polished.

7【Gold plating】 After pickling, decontamination, and sanding the polished cloisonne, put it into the gold plating liquid, and use the power-on procedure to make the gold adhere to the metal body without the glaze. The purpose of gold plating is to keep the metal body from corroding and rusting, and also to make the utensils look as bright as new and resplendent. Finally, after washing, rinsing and drying, a piece of dazzling cloisonne is completed.